The Social Media Reaction To The Manchester Bombing 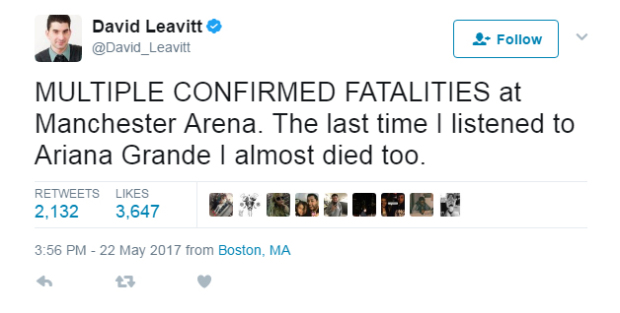 The rules of mass communication have been changing for the last few years, but as social media has given everyone the opportunity to mass broadcast their innermost thoughts to followers around the world.

Jon Ronson covered this in  fantastic book; so you’ve been publicaly shamed http://amzn.to/2uoGpAA which goes into detail about cases such as Justine Sacco whose life was turned upside down after making racist comments on Twitter in 2015.

A considerable amount of time has passed since the Manchester 2017 bombing, but it should be recognised that after that terrorist attack hate and groupthink quickly spread as people looked for people to blame,

A reporter from the US quickly became a target for tweeting a joke:

A joke, albeit a poorly timed one. However people reacted in a sadly predictable fashion, one person writing on Twitter:

“Seriously makes me sick. I don’t say this often but I hope he gets fired”

In a world where mainstream comedians like Frankie Boyle joke about AIDS, rape and the IRA it should be questioned whether the reaction of the mainstream public is not only proportionate, but consonant with other media.

More disturbing, perhaps, was the reaction of multinational companies on Twitter, quick to distance themselves from David Leavitt (and claiming not to be his employer).

The social norms of social media are still being written, with current heavy users (a certain Donald Trump, for instance) displaying online behaviour that would have been unthinkable a few years ago.

The jokes that have lost people jobs may have been deemed acceptable some days or months after the incident. This brings to mind a question; how soon is too soon to joke about disasters or tragedies? The instantaneous nature of social media seems not to have changed the idea that the passing of time changes the socially acceptable limits of behaviour.

Students need to understand that while the rules of the media are changing, there is not such a thing as the much loved notion of fair. The wisdom of the crowds is having an effect on all of our lives for good and for ill, but we need to make sure that our children are educated not just for the world they are growing up in, but the world that they will inhabit when they leave school.